"I have never felt so good" - Linda

Real People, Making Real Changes for Their Health and Well Being 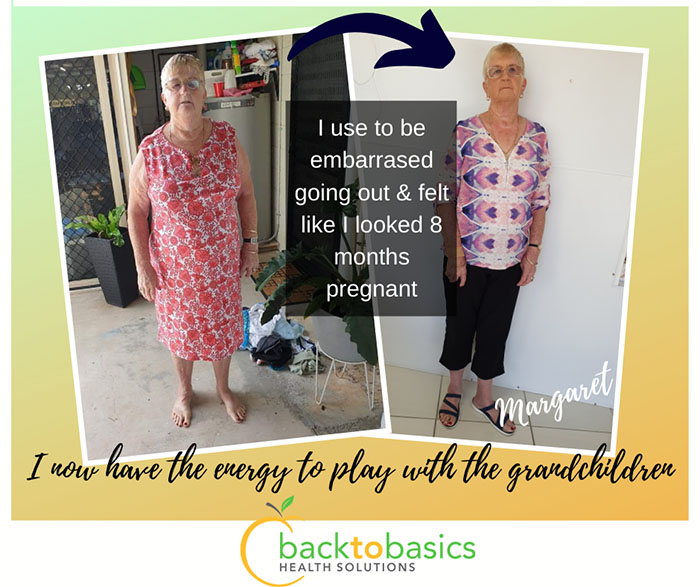 I Now Have The Energy To Play With My Grandchildren

Margaret, who is 73 years young, looked in the mirror and all I could see was this big fat blob. It was then that she decided she had to do something about her weight. She felt tired & lethargic, and her stomach was bloated; it looked like she was 8 months pregnant.

It was not until Margaret was 2 weeks into the Healthy Living Program that I uncovered there was more to her story. For 6 years Margaret had a bowel problem and had been to lots of specialists and Dr’s. They kept on telling her there was nothing wrong with her.

After a couple of weeks of changing the foods she was eating she not only started losing weight but we also uncovered the foods that were irritating her bowels. This was a life changing moment… she gained her freedom back and is no longer embarrassed to go outside and to the shops. Her energy levels have increased and she enjoys playing with her grandchildren again.

I Am Now Happier and More Confident With Myself​

At the age of 16 Ella should have been out having the time of her life.Instead she was feeling sad all of the time and her emotions were all over the place. Ella found that she was waking up in a bad mood in the mornings and taking it out on mum and dad. She was not in a happy place and knew she had to do something about it.

It wasn’t until she started the Healthy Living Program that she reaslised how much different foods were affecting her mood swings. Day by day she was feeling healthier and noticed she was a lot happier with loads of energy and she noticed she was focusing better during the day with her schoolwork.

The biggest thing Ella has learnt for herself is the connection food played in her everyday life and now she has a better understanding on how to control her weight. 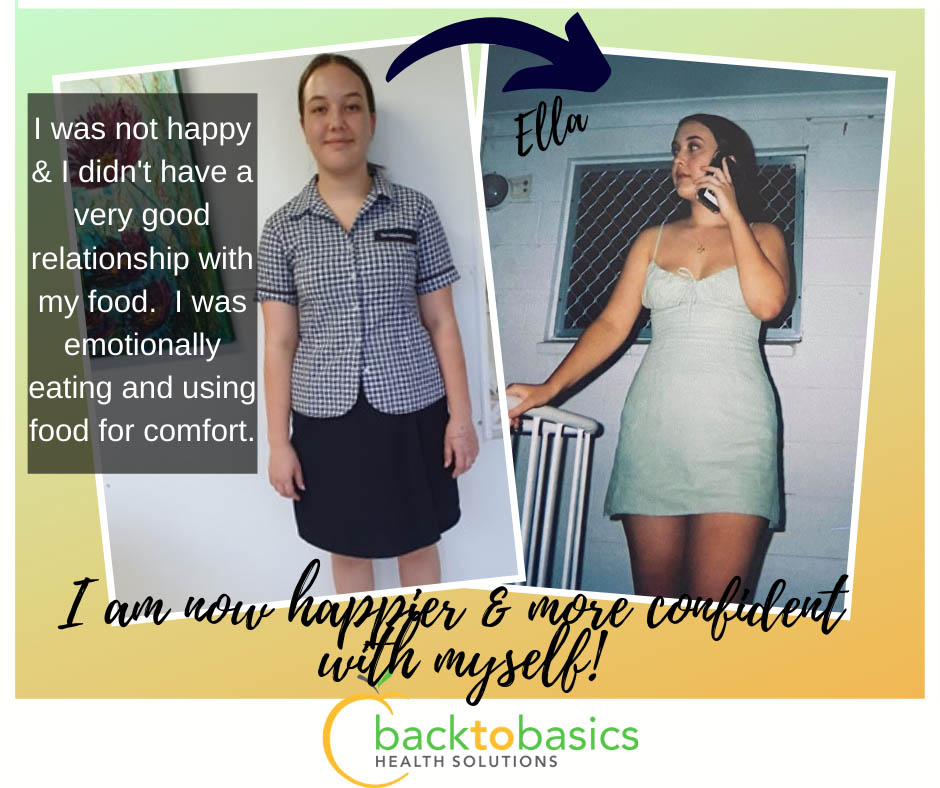 I Am Enjoying Life And Feel Great

When Tanya first came into my office to see me it was because she thought menopause was the issue why she had been struggling to lose those extra couple of kilos she had gained.

Tanya was fit, healthy and eating what she thought at the time a good diet. But the weight would not go down no matter what she tried. Because of Tanya’s social lifestyle she was looking for something she could keep more as a lifestyle plan verses going on a diet.

On the Healthy Living Program Tanya reaslised where she was going wrong and now has a better understanding on how to balance her week out to accommodate for her active social weekends. 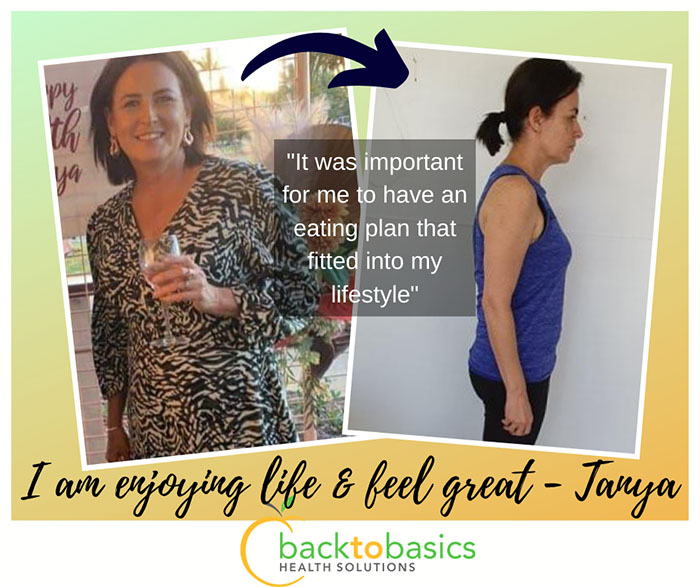 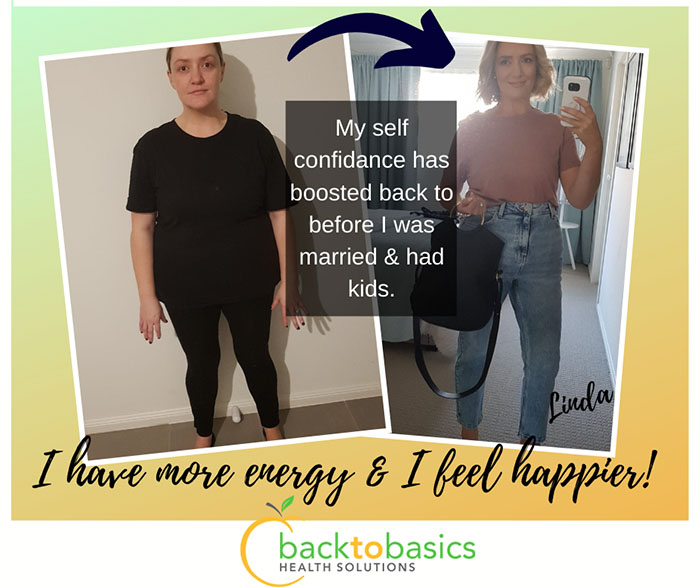 I Have More Enegry And I Feel Happier

When Linda first contacted me she was feeling flat & depressed and she had a whole cupboard of beautiful clothes that no longer fitted her. After having two children Linda was still carrying a lot of extra weight and she didn’t want to go back to work after maternity leave looking the way she was.

In the beginning Linda didn’t think it was even possible she could lose 20kg… until she was ticking those milestones each week and seeing real results. Linda was carrying a bit of extra weight before she met her husband Lance and has never seen her at this weight level she is today. Together they have both lost weight and found it fun connecting with each other again and proud they are doing this for their family.

I Have Not Been This Weight For 26 Years

Glenda had been on the slippery rollercoaster for more than 26 years and after chatting with me she decided it was time to make some changes. Glenda felt very depressed, tired all of the time and had no energy… she was miserable.

In 5 months of being on the Healthy Living Program Glenda has lost 22kg, is happier and motivated to do more things as she now has the energy to get up and go. 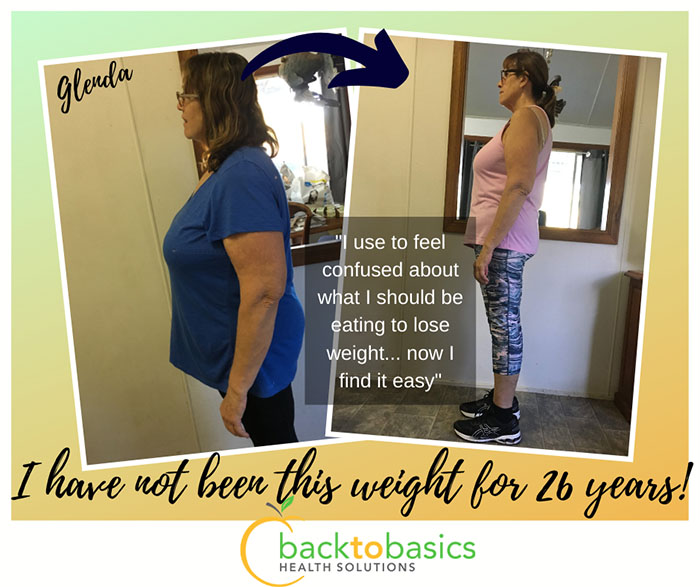 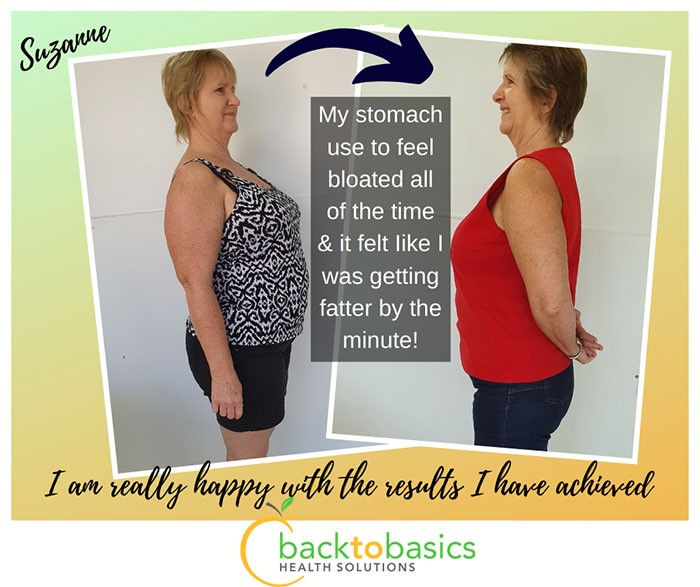 I Am Really Happy With The Results I Achieved

When I first spoke to Suzanne she didn’t start the Healthy Living Program straight away as she had a birthday party coming up and she wanted to think about it a little bit more.

During our chat she agreed with everything I was talking to her about. But in the back of her mind she had tried lots of diets, shakes & pills over the years. The big game changer for her is that she no longer wanted to feel the way she was feeling.

Daily Suzanne felt bloated in the stomach, tired and throwing heartburn tablets down her throat like they were smarties to stop the burning feeling in her chest. She knew deep deep down she needed to invest in herself and her future health to make some changes. Clearly hiding the scales was not working and she was getting bigger by the day.

Suzanne has lost 12kg and besides seeing the scales go down she also has noticed she no longer feels like crap! 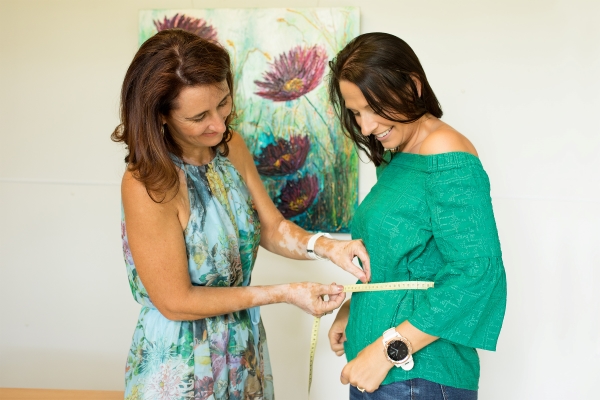 Are You Ready to Transform Your Life?

I’ll work with you to create a nutrition plan & healthy habits to achieve weight loss results.

If you’re ready to take the steps necessary to lose weight fast and keep it off through a tailored healthy weight loss program, book your free discovery session to understand where you are in your journey and how we can achieve you weight loss goals.
Schedule a Free Consultation 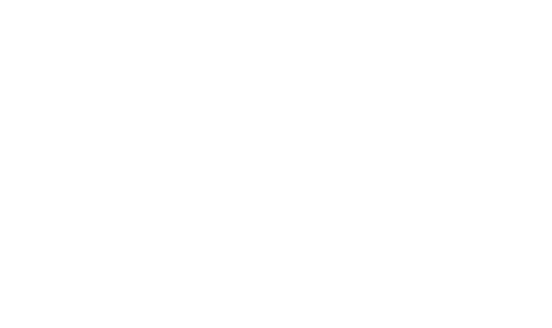 Awesome! Here is my calendar